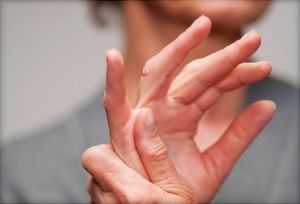 While no cure is available for psoriasis,many treatment options exist. Topical agents are typically used for mild disease, phototherapy for moderate disease, and systemic agents for severe disease.

The five main types of psoriasis are plaque, guttate, inverse, pustular, and erythrodermic. Plaque psoriasis, the most common form, typically manifests as red and white scaly patches on the top layer of the skin.Skin cells rapidly accumulate at these plaque sites and create a silvery-white appearance. Plaques frequently occur on the skin of the elbows and knees, but can affect any area, including the scalp, palms of hands, and soles of feet, and genitals. In contrast to eczema, psoriasis is more likely to be found on the outer side of the joint. Fingernails and toenails are frequently affected (psoriatic nail dystrophy) and can be seen as an isolated sign. Inflammation of the joints, known as psoriatic arthritis, affects up to 30% of individuals with psoriasis.

The causes of psoriasis are not fully understood. It is not purely a skin disorder and can have a negative impact on many organ systems. Psoriasis has been associated with an increased risk of certain cancers, cardiovascular disease, and other immune-mediated disorders such as Crohn’s disease and ulcerative colitis. It is generally considered a genetic disease, thought to be triggered or influenced by environmental factors.

Psoriasis develops when the immune system mistakes a normal skin cell for a pathogen, and sends out faulty signals that cause overproduction of new skin cells. It is not contagious.

Oxidative stress, stress, and withdrawal of a systemic corticosteroid have each been suggested as a trigger for psoriasis. Injury to the skin can trigger local psoriatic skin changes known as the Koebner phenomenon.

No cure is available for psoriasis, but various treatments can help to control the symptoms. The effectiveness and safety of targeted immune therapies is being studied, and several have been approved (or rejected for safety concerns) by regulatory authorities. The disease affects 2–4% of the general population.